My debut picture book with Bloomsbury and illustrated by Nick Sharratt is out now!

The lovely people at Bloomsbury made an amazing book trailer for the book which I have as a pinned tweet that you can view here.

My first book in The Last Firehawk series with Scholastic Branches is out now and it’s already had some fab reviews.

A terrible darkness is spreading across Perodia. Thorn, a powerful vulture, is using dark magic (and his dark army of spies!) to destroy the magical land. A young owl named Tag may be the only one who can save it! Tag dreams of one day becoming a brave warrior, but he is small . . . In this first book, Tag and his best friend — a squirrel named Skyla — meet the last firehawk. Together, the three friends learn about a magical stone. Could this stone be powerful enough to defeat Thorn? This action-packed series makes a great introduction to fantasy and quest stories for newly independent readers. Realistic black-and-white artwork appears on every page!

Praise for The Last Firehawk #1: The Ember Stone

“The first book in this new series brings the animal fantasy genre to early chapter book readers…. The adventure is nonstop, making this an ideal choice for reluctant readers…. Detailed black-and-white illustrations blend well with the text, and will keep kids engaged. VERDICT: A strong beginning to an adventure series for chapter book readers, especially those who are not quite ready for Erin Hunter’s ‘Warriors’ or Kathryn Lasky’s ‘Guardians of Ga’Hoole.'” — School Library Journal

“A promising start to a series for fledgling fantasy readers.” — Kirkus Reviews

I’m so excited to be able to reveal the cover for the first book in my Survival Tails series with Little, Brown Young Readers. Survival Tails: Titanic will be out in March 2018 and I am so happy that the cover was illustrated by the talented Owen Richardson. He’s down an amazing job and has captured the characters’ perfectly.

I am thrilled to announce that I have signed a four book deal with Little Brown Young Readers for my new Survival Tails series.

Here’s the announcement in Publishers Weekly.

The series follows historical events and amazing tales of survival from various animals’ points of view. I am ecstatic to be working with editor Lisa Yoskowitz and can’t wait for the first book Titanic to be in readers’ hands.

My author copies of Poppy’s Place 4 – Secrets at the Cat Cafe arrived yesterday and they are gorgeous! The team at Stripes and Lucy Truman the illustrator have done an amazing job once again. I love the little details Lucy includes on the cover, and best of all it has sparkly golden bits!

Secrets at the Cat Cafe is out in July.

Undiscovered Voices is a competition run by SCBWI British Isles, and it offers an amazing opportunity for unpublished children’s authors and illustrators to be discovered.

My own writing career really took off when I entered this competition in 2013. Honestly, I didn’t think I had much of a chance, but I asked myself, what do I have to lose? So I took a deep breath, and submitted the first few pages of my YA novel PHOENIX.

Then I found out I had made the long list.

I continued on with daily life and writing and tried not to think about the submission, when one day I got the call from the wonderful Sara Grant, one of the co-founders of the competition, telling me that I was one of the chosen 12 authors who would have their writing featured in the 2014 Undiscovered Voices anthology which was sent out to industry professionals and would have the opportunity to attend the launch party where I could meet agents, editors and fellow writers.

It was a dream come true, and on the day of the launch I was incredibly nervous. I’d gone alone and, was worried I’d sit in the corner by myself all evening but from the moment I entered, I was introduced to people and ended up talking all evening with the most amazing people who worked in the industry and knew what they were talking about, and most amazing of all were telling me they liked my writing!

Everything was a bit of a whirlwind after that. I had multiple offers of representation and decided to go with Gemma Cooper at the Bent Agency who had been at the top of my agent wish list for a very long time.

PHOENIX wasn’t published, but shortly after I got a book deal, then another, then another. I now have book deals for eleven books ranging from picture books, early readers, chapter books and Middle Grade, with more exciting news on the way.

So what have you got to lose? Take a deep breath and press that send button. You never know where it might lead you.

I am so excited to finally be able to show you the cover of the first book in my Last Firehawk series – The Ember Stone – which is being published by Scholastic Branches in the US. The illustrator Jeremy Norton is extremely talented and has done an amazing job at capturing the characters, fantasy world and sense of adventure that this series is all about. 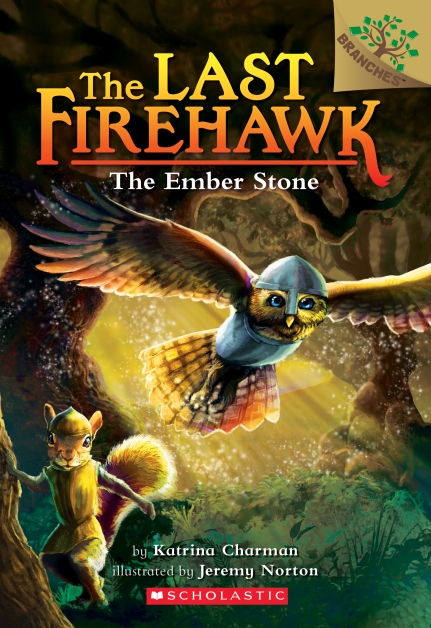 I am so pleased to announce that my debut picture book, Car, Car, Truck, Jeep, will be published by Bloomsbury in March 2018 with a second book to follow. The most exciting part is that the books are going to be illustrated by the supremely talented Nick Sharratt!

I am absolutely over the moon that my debut picture book has found the perfect home with Bloomsbury and I can’t wait to see it in the hands of young readers!